Kathmandu, also known as the City of Temples, with one of the oldest Pagodas known as the Pashupatinath Temple, stands in the bowl-shaped Kathmandu Valley in central Nepal at an altitude of about 1,400 meters (4,600 feet) above sea level.

For many years, Kathmandu has been the centre of the history, architecture, culture and economy of Nepal. Within a Hindu and Buddhist majority, it has a multi-ethnic population. A major part of the lives of people living in Kathmandu is religious and cultural festivities. Tourism is a big part of the economy. In 2013, TripAdvisor ranked Kathmandu fifth among the world's top ten upcoming travel destinations, ranking first in Asia. The city is the gateway to the Himalayas of Nepal and home to several sites of world heritage: Durbar Square, Swayambhunath, Boudhanath and Pashupatinath.

Here are the things to do in KTM: -

With such a diverse city as Kathmandu, there are certainly plenty of attractions or landmarks worth visiting, but to get started, below are some of the places you must NOT skip!

This is a holy Hindu temple complex that serves as the seat of the national deity of Nepal, Lord Shiva (one of the main Hindu deities where Pashupatinath or Pashupathi is one of his names). As the city's oldest Hindu temple, you can find a widespread mix of temples, ashrams (spiritual monasteries), images, and inscriptions from the moment you set foot in this location.

Tips: If you want a unique experience, you can visit in the morning to see them do cremations or visit in the evening from 6PM to see the aarti (worship with fire).

This is a well-known stupa (place of meditation) overlooking Kathmandu's skyline, where its huge mandala (spiritual symbol in Buddhism) makes it one of Nepal's largest spherical stupas. It helps to note that it has been a beacon of Buddhist belief for centuries and has since been an important place for many local Nepalis and Tibetan Buddhists to meditate and pilgrimage.

This is an ancient religious architecture that includes shrines, temples, a stupa, a Tibetan monastery, a museum, and a library — in addition, it's also surrounded by' holy monkeys' (as per mythology) that gained its nickname:' Monkey Temple.' Although this site is considered Buddhist, both Buddhist and Hindus still have to reverence it.

Tips: Visit the Tamang Gompa monastery to get a beautiful panoramic view of the stapa. Meanwhile, it's best to come either early in the morning or early in the evening for a less crowded environment.

'Durbar Square' is a generic name used to identify plazas opposite old royal palaces in Nepal, and this particular Durbar Square in Kathmandu City is surrounded by magnificent architecture that exhibits the skills of Newar (Kathmandu Valley historical inhabitants) artists for centuries.Regrettably, due to the big earthquake that occurred last 2015, some of the buildings here have fallen — but the charm of this square remains due to its impressive palaces, courtyards and temples.

Old City: Make sure you visit this tangle of narrow alleys and temples located north and south of the central Durbar Square as one of your things to do in Kathmandu City, so you can also take a closer look at the culture and way of life of the local people.

For its courses on Tibetan Buddhism, this Tibetan Buddhist monastery near Boudhanath is mainly popular with foreigners. Visitors are usually welcome to join their morning meditation sessions as well as introductory and advanced courses (held in English).

Go through Thamel and enjoy it!

If you're searching for the city's most vibrant commercial area, you just need to head to Thamel, which is renowned for its narrow alleys filled with various buildings and vendors: clubs, hotels, hostels, bars, cafes, stores, tour operators, and more — you'll find almost everything here! Following is a list of recommended things to do in Kathmandu's Thamel to complete your itinerary:

Fly above the Himalayas

Let's face it: many of us are NOT prepared to reach the height of the highest peak in the world; but thankfully, as part of your job in Kathmandu, there are providers in Nepal that give anyone the chance to get close to the Himalayas and see the beauty of Mt. Everest.

Of course, nothing beats the trekking trip up to the summit or to the Everest Base Camp — but if you can't do that, why not travel there, right? Besides, in just a few hundred meters you will be among the fortunate few who will be able to witness this magnificent mountain range from above!

And ... as you'd imagine, it's NOT absolutely cheap; but surely, it's going to be worth it!

For 45 minutes to an hour, most flights start at about $150 where you can choose from two options: either by helicopter or by plane. There are many tour operators providing helicopter rides, but when it comes to aerial flights, there are 3 airlines popular for doing this: Buddha Air, Guna Air, and Yeti Air.

As part of your job in Kathmandu, you can make sure you always take the opportunity to appreciate the natural scenery surrounding the city by doing the following outdoor activities ...

Explore nearby cities and towns

Want to completely escape Kathmandu's traffic and urban setting? There are several beautiful towns and cities you can visit in the course of your time. 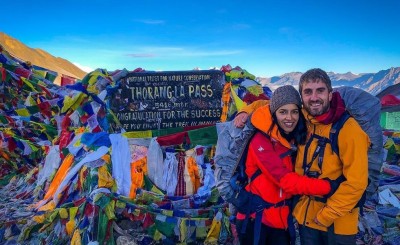 KATHMANDU: The government has postponed the international promotional campaign for Visit Nepal 2020. The announcement comes ...